Raspigaous, is a group of French Reggae / Ska, born in the Panier district in Marseille in 1997.
The group quickly stood out from the local scene, thanks to its contagious choruses and continued concerts without interruption.

In 1999, they released their first album “Chaud Time” at the end of a national tour, selling over 30,000 copies, enjoying ever growing success. Raspigaous is a festive and very committed group, its words, written by Lionel Léo Achenza, leader of the group, depict social reality, with humor, irony and simplicity. The group’s latest album: “NOUVEL R”, released in 2019, is an album tinged with groove and conscious lyrics.

Raspigaous come to blow a new R on French reggae … 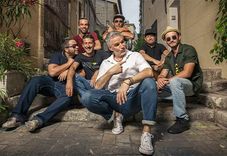